[Press Release] Revelation of the Chicago Tribune on the tests of the most popular cell phones in the United States. 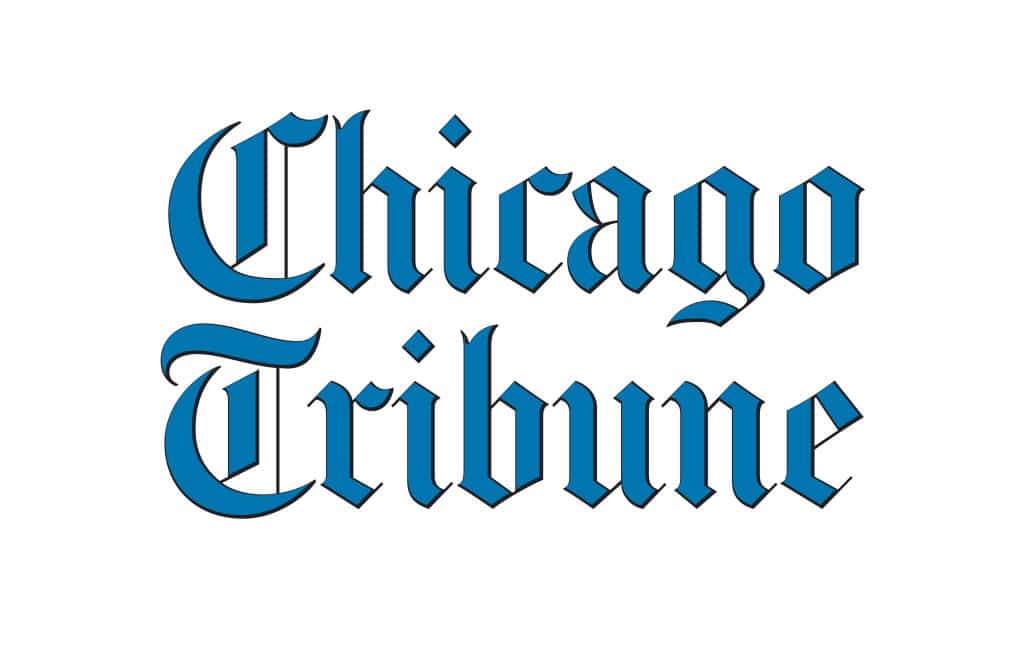 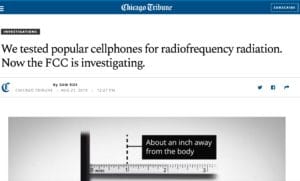 In an article published on August 21, 2019, entitled “We tested popular cellphones for radiofrequency radiation. Now the FCC is investigating”, journalist Sam Roe reveals the result of more than a year of investigative work.

This journalist from the Chicago Tribune was part of a team of journalists who won the 2008 Pulitzer Prize for investigative reporting for their examination of dangerous toys and other products for children. Roe has also been a Pulitzer Prize finalist four times.

Roe contacted us more than a year ago when he discovered information about our alert on the Phonegate industrial and health scandal following the revelations we obtained from the test reports carried out by the National Frequencies Agency (ANFR).
The choice of independent tests

The Chicago Tribune chose to independently test 11 of the most popular mobile phone models, including Apple’s iPhone 7 and 8, Korean manufacturer Samsung’s Galaxy S8, S9, J3 and Motorola’s Motoe5 Play.
The tests by the Chicago Tribune were conducted by RF Exposure Lab, a laboratory based in San Marcos, California, which is recognized by the Federal Communications Commission (FCC) as being accredited to test radiofrequency radiation from electronic devices. For 15 years, the laboratory has been conducting radiation tests for mobile phone companies seeking U.S. government approval for the introduction of new products.

As in the case of the ANFR tests, they were carried out at the FCC’s regulatory distance, between 10 and 15 mm from the skin, with the exception of Apple, which has been testing its iPhone at 5 mm since 2014, and also at a more realistic distance corresponding to our uses (pockets), i.e. 2 mm.
The results are just as worrying as the ones we revealed three years ago. Indeed, the iPhone 7 tested at 5 mm far exceeds the U.S. regulatory limit (1.6W/kg for 1gr of tissue), i.e. 2.6 W/kg, 2.81 W/kg, and finally 2.50 W/kg. 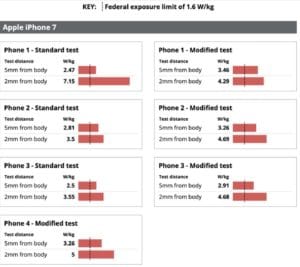 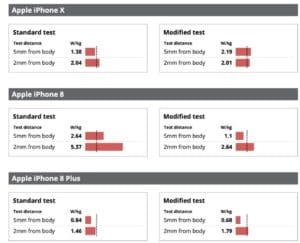 Apple, contacted by the newspaper, contested the validity of the tests carried out and did not want to answer the journalist’s questions.

As for the three Samsung phones, SAR levels soared with a Galaxy S8 measurement more than 5 times the regulatory limit (8.22 W/kg), measurement taken at a distance of 2 mm from the skin.

For the Motorola e5 Play, the SAR is just as high, exceeding the regulatory limit by four times.

In response to the results of the test reports, the FCC is giving itself two months to answer the many questions raised by the publication of these SAR measurements.

Already in April 2018, we wrote to FCC Chairman Ajit Pai with Dr. Devra Davis, President of the Environmental Health Trust, informing him of the Phonegate’s revelations and asking him to take action. Not only did we not receive any response from Mr. Pai, but also he announced in a press release on August 8 that he would not make any changes to the regulations, which date back to 1996 and which we knew posed a risk to the health of users.

For Dr. Arazi, President of Phonegate Alert:
“It is the first major American media to take on the Phonegate affair and we are sure it is a historic turning point. We would like to thank them for having the courage to publish overwhelming evidence regarding the world’s leading mobile phone manufacturers.”

Dr. Devra Davis, a member of our scientific committee, reacted yesterday by email:
“The Chicago investigation confirms what Phonegate has warned about for some time now. When phones are tested as they are used they exceed the current guidelines. And those guidelines for testing are woefully inadequate and do not protect against reproductive damage to men as well as brain cancer risk.”