Canada: 9 out of 10 cell phones exceed regulatory limits in real use 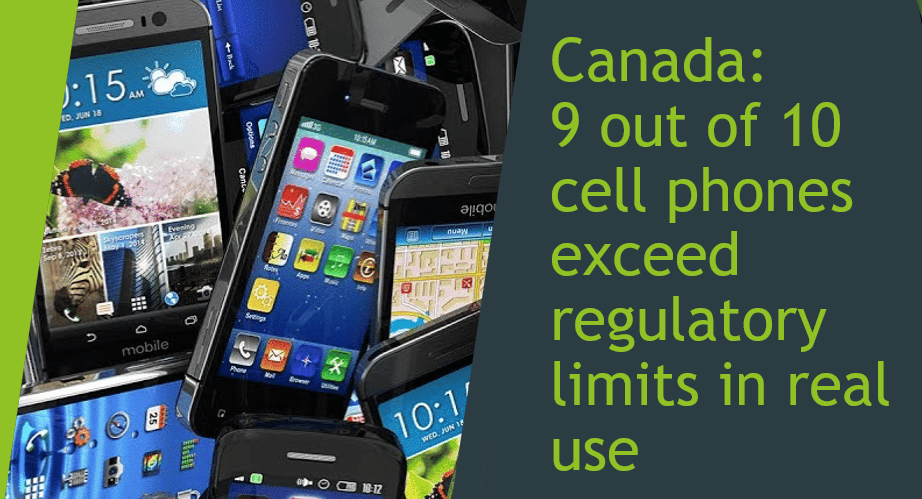 In March 2022 after two years of waiting, the Canadian agency, Innovation, Science and Economic Development (ISED) sent to our contact, Sharon Noble, the list of test results of 90 smartphones whose SAR (Specific Absorption Rate) had been monitored between 2015 and 2021.

The SAR is an indicator supposed to protect the health of users. However, the Canadian agency had omitted to specify the SAR measurement distance between the cell phone and the body. We now understand why: according to new data (requested from the ISED, received in a letter on June 8, 2022), 9 cell phones out of 10 would far exceed the regulatory thresholds during real use of the phone in contact with the body.

In fact, during the SAR body measurement test, the contact distance was carried out at 10 mm from the skin for more than 80% of the phones tested and at 15 mm for 10% (tables below). This distance is completely unrealistic with our use, for example when a user keeps his/her phone in the pocket.

Following an emergency measure presented in 2015 by France to the European Commission, Europe has since required cell phone manufacturers to measure body SAR at 5 mm from the skin.

This is the consequence of SAR tests conducted between 2012 and 2015 by the French telecom regulator (ANFR, National Frequency Agency), showing that 9 out of 10 cell phones already exceeded European regulatory thresholds when the body SAR was measured, either in contact with the skin (at 0 mm) or almost in contact (5 mm).

However, it was not until 2018 and the actions of Dr. Marc Arazi before the French administrative courts – as well as his revelations of the Phonegate scandal – that several hundred of these SAR test reports conducted by ANFR were finally made public. And it took another four years for the Canadian tests to be revealed (but still not made public in Canada).

Such opacity is all the less understandable in that in 2019 ANSES – National Agency for Food, Environmental and Occupational Health & Safety – wrote in a report to the French public authorities:

« The Agency recommends modifying the standard provisions relating to the distance of radio devices that can be placed close to the body to ensure that compliance verification measurements for SARs are carried out when the phone is in contact with the body (0 mm). »

As a result, in September 2020, France filed a formal objection with the European Commission (EC), of which the following is an excerpt:

« For this reason, the French authorities believe that it is necessary to revise the harmonised standard EN 50566: 2017 concerning measurements of the SAR of devices that are hand-held or body-mounted in close proximity to the human body so that a maximum distance of 0 mm from the body is taken into consideration. This change would take account of the reasonably foreseeable use of the equipment, in accordance with Directive 2014/53/EU3, known as ‘RED’, especially Article 17(1) thereof, and of the recommendations made by ANSES in its aforementioned opinion of 10 July 2019. »

The EC has not yet responded to France’s request.

Manufacturers and authorities need to review their standards

Om Gandhi, Professor Emeritus, University of Utah, published an analysis in 2019 in the IEEE magazine based on ANFR test results that in summary shows an increase in the SAR level of up to :

“a rate of 10-15% for every millimeter closer to the radiating elements of the [smartphone] antenna.

For this expert closely associated with the definition of international safety standards and SAR dosimetry:

“Such testing methods will lead to highly inaccurate results which may explain the very low SARs that are being reported by ISED.”

On her part, Sharon Noble is calling for an investigation into current Canadian regulations that do not at all protect consumers:

“The Canadian public is being misled about the safety of cell phones by both Health Canada which sets the “safety” standard of Safety Code 6 and by ISED which is responsible for enforcing it. The guideline is one of the least stringent in the world and is not protective of the type of radiation emitted by cell phones. ISED is negligent in its testing. Not only does it not require testing to be done in a manner that replicates the way phones are used, but it also has failed to test phones which have been found by others, e.g. Phonegate, to be in violation of Safety Code 6.”

On his side, Dr. Marc Arazi, whose English translation of the book Phonegate has just been published by Massot Editions:

“This “oversight” by ISED when making public the distance data during the body SAR measurement speaks volumes about the lack of transparency of the agency and  the unreliability of the Canadian regulations that are supposed to protect the health of cell phone users. We hope that these new revelations will encourage manufacturers and authorities to review the standards that govern their placing cell phones on the market in North America.”

Table of non-compliant cell phones of the ISED


On the same subject :

The book Phonegate in English

Order the book or the eBook 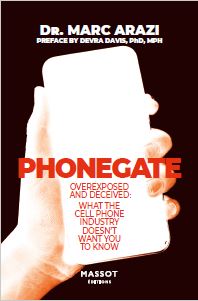