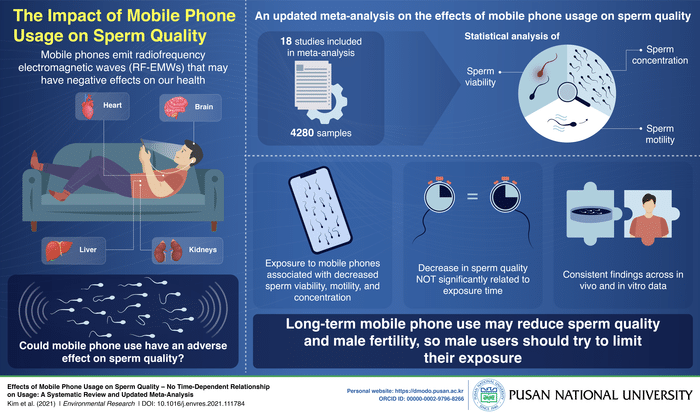 A new Korean study confirms the link between the use of cell phones and the danger for fertility. Researchers have found a decline in the quality of spermatozoa in men: smartphones degrade the quality of sperm by reducing their motility, viability and concentration. This meta-analysis was published in the scientific journal Environmental Research after a peer-reviewed publication.

Here is the press release published in EurekAlert! on January 24, 2022.

Over the years, many international studies have shown the link between the use of cell phones and a significant decrease in sperm quality, which can lead to infertility in men. This Korean study confirms it! Assistant Professor Yun Hak Kim of the National University of Pusan warns:

“Male cell-phone users should strive to reduce mobile phone use to protect their sperm quality.”

Thus, according to a study published in 2016 by researchers from the Technion and Carmel Medical Center (Israel) and as reported on the website of Cnews, a 24-hour news channel:

Starting with the observation that male fertility in the West was steadily declining, the scientists studied how a sample of men used their smartphones, in order to compare these practices with the spermatozoa count in their semen. And they found that men who kept their phones within 50 cm of their groin had insufficient levels of spermatozoa to reproduce.

As part of our action to warn about overexposure to the thermal effects of smartphone waves (microwave-type heating effect), which are particularly risky for spermatozoa, our NGO Phonegate Alert advises users to avoid contact of cell phones or any other connected object (tablet, laptop, etc…) with the pelvic area. Never carry a cell phone in your pants pocket!

For Dr. Marc Arazi who presides over the association and who is at the origin of the revelations of the Phonegate health scandal:

“Public authorities must intensify scientific research on the risks of infertility related to the use of cell phones worn close to the body both in men and women and finally take into account the total lack of credibility of the specific absorption rate (SAR) as an indicator to protect health.”

Don’t put your cell phone in your pocket anymore !