French ministerial announcements: an important step in our actions to protect the health of mobile phone users 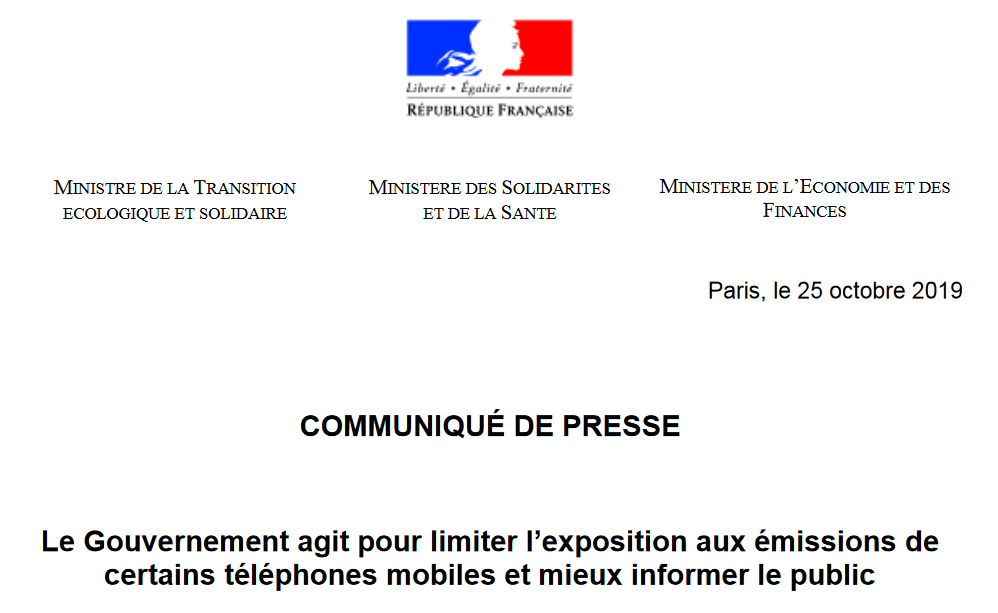 In a joint statement published today, the French ministries of Health, Ecology and Economy announced several proposals for action to strengthen health protection for mobile phone users in France and Europe. These are in the context of the recommendations made on 21 October 2019 by the French health & safety agency in its report entitled “Mobile phones worn close to the body and health”, and the mobilization actions of our association following the revelation in July 2016 by Dr Marc Arazi of the Phonegate industrial and health scandal.

“This is undoubtedly another victory for our association and for all the partner organisations, independent scientists, lawyers who are members of the Consortium, journalists who work in France and abroad to protect the health of the 5 billion mobile phone users”.

However, we regret the lack of consultation with the associations that are fighting this fight. We reiterate our call for a meeting with the ministers concerned. To this end, we will take an initiative in the coming days.

The Government is taking action to limit exposure to the emissions

of certain mobile phones and to better inform the public

The National Agency for Food, Environmental and Occupational Health & Safety (ANSES) published its opinion on 21 October 2019 on the health effects of waves emitted by mobile phones when used close to the body. The opinion does not include evidence of serious and immediate danger but stresses that the results of the scientific studies published to date do not exclude the occurrence of biological effects in humans above certain thresholds.

As a precautionary measure, the Ministers of the Ecological and Inclusive Transition,

Solidarity and Health and Economy and Finance have decided to undertake the following actions, which will make it possible to respond to the recommendations made by ANSES. They will be carried out with the support of the National Frequencies Agency (ANFR):

1/ France will ask the European Commission to strengthen the requirements applicable to new mobile phones placed on the market. As recommended by ANSES, the Government will request that the certification tests be carried out in contact with the device, and not at 5 mm as is currently the case, so that they are more representative of the real exposure of users;

allow each user to know the emissions of their mobile phone model;

– The recommended distances of use will also be indicated on the website of ANFR (data.anfr.fr), which already mentions the distances for controlled phones, as well as on the “Open Barre” application. On the condition of good cooperation with the manufacturers, they will also be available by the end of the year.

3/ The Government will bring together the main manufacturers to engage in a voluntary action to update the software of their models put on the market before the application of recent standards, which are more restrictive in terms of emissions;

when using a mobile phone to reduce their exposure to radiofrequencies

*What is the SAR?

Part of the energy carried by electromagnetic waves is absorbed by the human body. To quantify this effect, the reference measurement is the specific absorption rate (SAR), for all waves between 100 kHz and 10 GHz. The SAR is expressed in watts per kilogram (W/kg).