Mobi-kids: a study infiltrated by the mobile phone industry 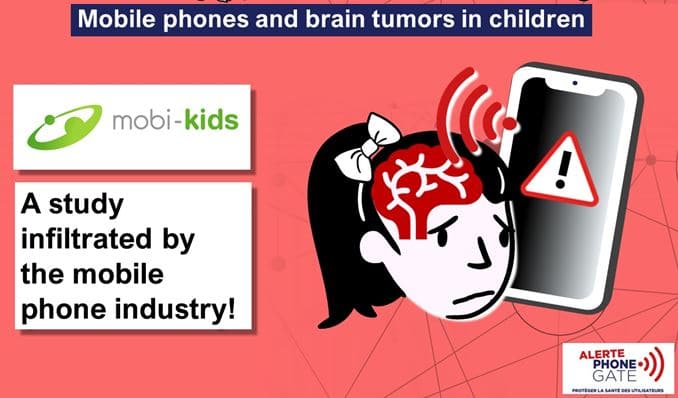 Our investigation into the conflicts of interest of the authors of the Mobi-kids study [which analyzes the impact of wireless phones on the risk of brain tumors in young people] has now shown that ten of the eighteen people in charge of measuring the exposure of patients worked directly or indirectly for the mobile phone industry.

What is now also evident in the organization of this study are the proven conflicts of interest with the mobile phone industry of ISGlobal, the Institute of Global Health of Barcelona (which, according to their website, includes the banking foundation “la Caixa“, academic institutions and government agencies).

In fact, that is where the problem lies because, according to the Wikipedia entry on “la Caixa“, there are several close financial ties with mobile phone companies such as Cellnex telecom and Telefónica :

The La Caixa Banking Foundation manages the Group’s shareholdings through Criteria Caixa (formerly Criteria CaixaHolding), a equity instrumental company fully controlled by the foundation. The shares of Criteria Caixa include the ones owned in CaixaBank (as of 31 December 2018: 40.00%),[19] as well as those held in several companies including Cellnex, Naturgy, Saba, Suez and Telefónica.

Can this explain the choices of ISGlobal and its coordinator of the Mobi-kids study, Elisabeth Cardis, of, to say the least, highly controversial experts with important conflicts of interest? You be the judge!

In an article published in June 2014 on the website dedicated to the Mobi-kids study, ISGlobal presents the international team in charge of the “exposure measurement”. There are a total of seventeen people in this specialized working group under the responsibility of the British researcher Myrion Maslanyi.

The French team is led by Joe Wiart. At the time, Mr. Wiart was working directly for the mobile phone operator Orange. He is the manager of Orange Labs. However, despite the evidence of conflicts of interest, here is what has been added to the section “conflicts of interest” concerning him:

« Before 2015 J Wiart was an employee of Orange. At that time, his work in the study was limited to dosimetry. In 2015 he became Ingenieur General des Mines, employed by the Institut Mines-Télécom, a state academic institute. J Wiart has no conflict of interest to declare. »

Really, can we accept this statement that Mr. Joe Wiart has no conflict of interest to declare?

To get a clearer picture, it is necessary to add that his team is composed of four other persons, they too working for the industrialist Orange, namely, Emmanuelle Conil, Nadège Varsier, Abdelhamid Hadjem, and also Thierry Sarrebrousse who was not quoted in the above article (it will be our eighteenth contributor). This means that no less than five people paid by Orange have contributed directly to the study. But the Mobi-kids authors have nothing to say about it!

The Korean team is under the responsibility of the expert Ae Kyoung Lee. The work of the investigation by Phonegate Alert has brought to light the important undeclared conflicts of interest of this author. We are now able to show that the other two members of her team, Hyung Do Choi and Seon Eui Hong, have similar levels of conflict of interest. Indeed, they also work for the Electronics and Telecommunications Research Institute (ETRI).

As shown by figures posted by ETRI in 2014 – and remember that the Mobi-kids study ran between 2009 and 2016 – the Institute earned more than $152.3 million in royalties from filed patents. And that’s just a tiny fraction of the money tied to the mobile phone industry.

The same applies to the expert in charge of the Japanese component of the study, Mr. Masao Taki.

Indeed, clearly, Mr. Masao Taki should also be listed in the conflicts of interest section. In fact, it was not made a secret in a previous publication devoted to the Mobi-kids study, published in the epidemiology journal Frontiers in Public Health in September 2014 and signed by the same authors. It stated:

This conflict of interest simply disappeared in the article published at the end of 2021. However, we have found the explanation, and it would still be the industrialist Orange (formerly France Télécom) that we find in charge through its subsidiary Whist Lab (joint laboratory of the Institut Mines-Télécom and Orange).

The Australian component of the study was entrusted to Mr. Malcolm Sim. A quick search on our part showed that during the publication of an article in Frontiers in Public Health (September 2014) concerning the Mobi-kids study, Mr. Sim had to declare a conflict of interest concerning shares of firms in the mobile phone industry owned by his wife. However, there is no longer any mention of this today!

Furthermore, Sim was assisted in his task by another author, namely, the expert Geza Benke. The least that can be said about his work on the subject is that it is particularly close to that of ICNIRP (International Commission on Non-Ionizing Radiation Protection). What is more, while Benke is not (to our knowledge) a member of this organization, he has been directly involved in several  articles with members of ICNIRP, most recently with its president, Rodney Croft of Australia.

At this stage, our research is still ongoing regarding the British experts Carolina Calderon, Terry Mee and Darren Addison. However, neither the expert Ae Kyoung Lee nor her collaborators, nor Masao Taki, nor Malcolm Sim appear in the “conflicts of interest” section to date. And Mr. Adrian Covaci, co-editor-in-chief of the journal Environment International (Elsevier group) has still not intervened to place a warning or better, to withdraw the article.

Finally, the Dutch part was entrusted to Mr. Hans Kromhout who was assisted by Roel Vermeulen and Geertte Goedhart-Wolf. Our investigation into possible conflicts of interest is also still ongoing.

However, in a recent interview given by Roel Vermeulen, he told the journalist of the BN DeStem website:

Vermeulen, who disputes the role played by industry, seems to be unaware of the many conflicts of interest that undermine the strategic core of the Mobi-kids study, even though our investigative work has shown that ten out of eighteen stakeholders are problematic, which is already almost two-thirds.

An analysis from 2012, entitled “How conflicts of interest can influence research and expertise”, details the strategies implemented by industrialists:

“In any experimentation, in the biomedical field as in other fields, the design of the study influences the results.”

For Dr. Marc Arazi who presides over the NGO Phonegate Alert:

« There is no longer any doubt that the mobile phone industry has infiltrated a study led by ISGlobal and financed mostly by public funds from the European Commission. It remains to be seen how involved the fifty or so scientific authors are. Did they just turn a blind eye to these practices, or worse, did they allow the results of this study to be deliberately biased? »

For more information’s on our investigation :

[Investigation] Mobi-kids: a study undermined by conflicts of interest