Mobi-kids: Orange at the heart of the study! 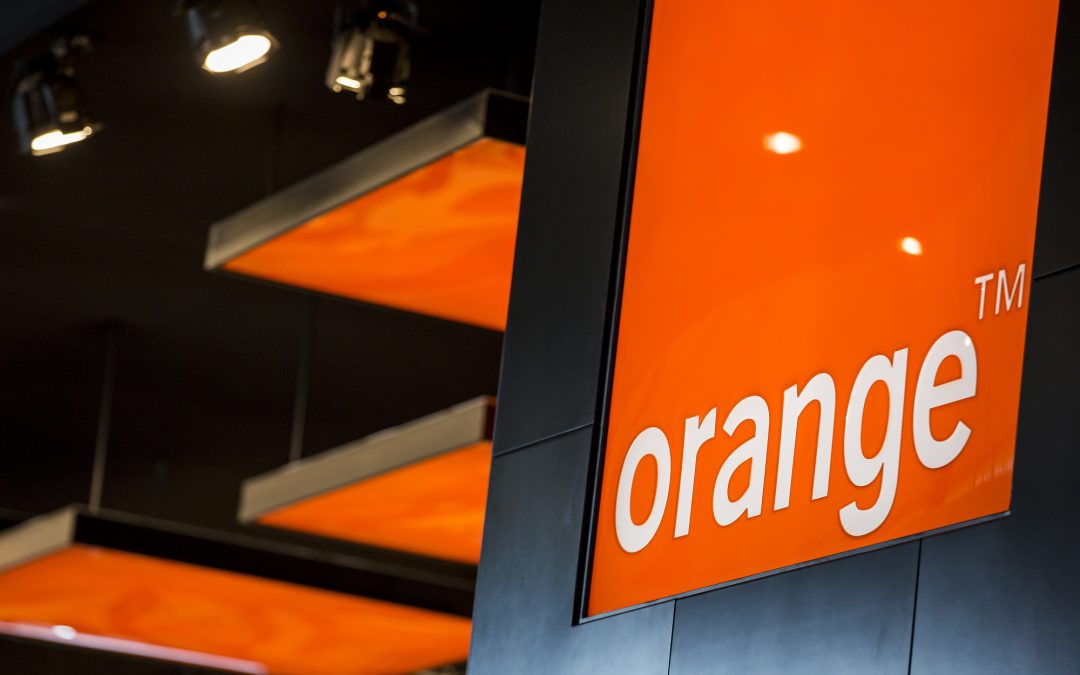 Our investigation into the Mobi-kids study shows how the Orange industrial group was active at the heart of the scientific process. Five employees of its subsidiary Orange Labs took part in the elaboration of the exposure measurement tools for children with brain tumors.

Following our various e-mails to the authors of the study as well as to the coordinator of the scientific team, Ms. Elisabeth Cardis, the article published on December 30, 2021 has been modified. The part “Conflicts of interest”, omitted according to Ms. Cardis, has been incorporated in the new version (see our previous press release).

Joe Wiart at the forefront of Orange 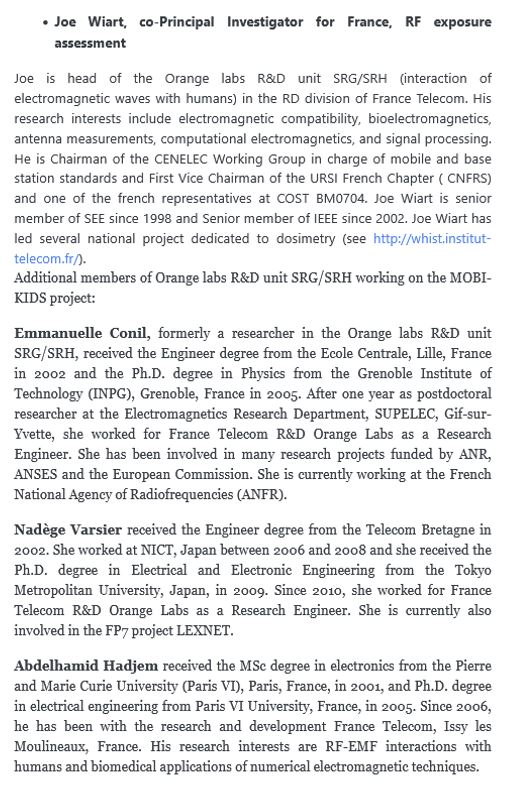 This first success for our transparency action, however, remains all relative. This is what we wrote to the authors of the Mobi-kids study in an e-mail dated February 4, 2022. Thus, concerning Mr. Joe Wiart, at the forefront of Orange Labs, we asked the authors the following question:

“In this regard, we do not understand the distinction you make for Mr. Joe Wiart. Indeed, how can he be listed under conflicts of interest and at the same time consider that he has no conflicts to declare?”

Our association Phonegate Alert also informed Mobi-kids scientists of its new findings regarding the role of Orange while wanting to know if they were thinking of rigorously updating the “Conflicts of interest” section of their article.

We pursued our investigations. Surprisingly, five Orange Labs employees, including Joe Wiart, were directly involved in the Mobi-kids study. However, none of them appears in the “Conflicts of interest” section, nor does the company.

The strategy used by the authors to minimize the role played by Orange is well-tried. These contributors are given credit in the acknowledgement sections of the articles devoted to Mobi-kids and Mobi-expo.

Several other articles published by the authors of the Mobi-kids study, including this one from 2018 (Environmental Research), do not include Mr. Wiart and Orange in the “Conflicts of interest” section either (see screenshot below). 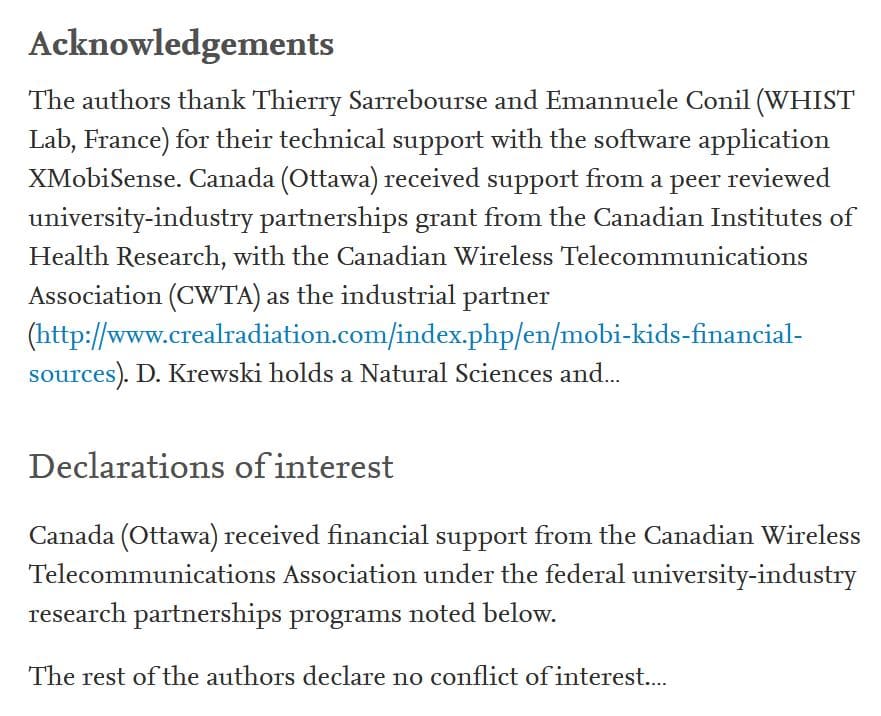 This is how our Association was able to bring to light the participation of Ms. Emmanuelle Conil, Ms. Nadège Varsier, Mr. Thierry Sarrebourse and Mr. Habdelhamid Hadjen. All of them were working for Orange Labs at the time of the study.

This team, paid by the cell phone company, was involved in what we consider to be one of the strategic cores of the study. They developed the software used to measure the exposure of children with brain tumors (XMobisense and XGridmaster). 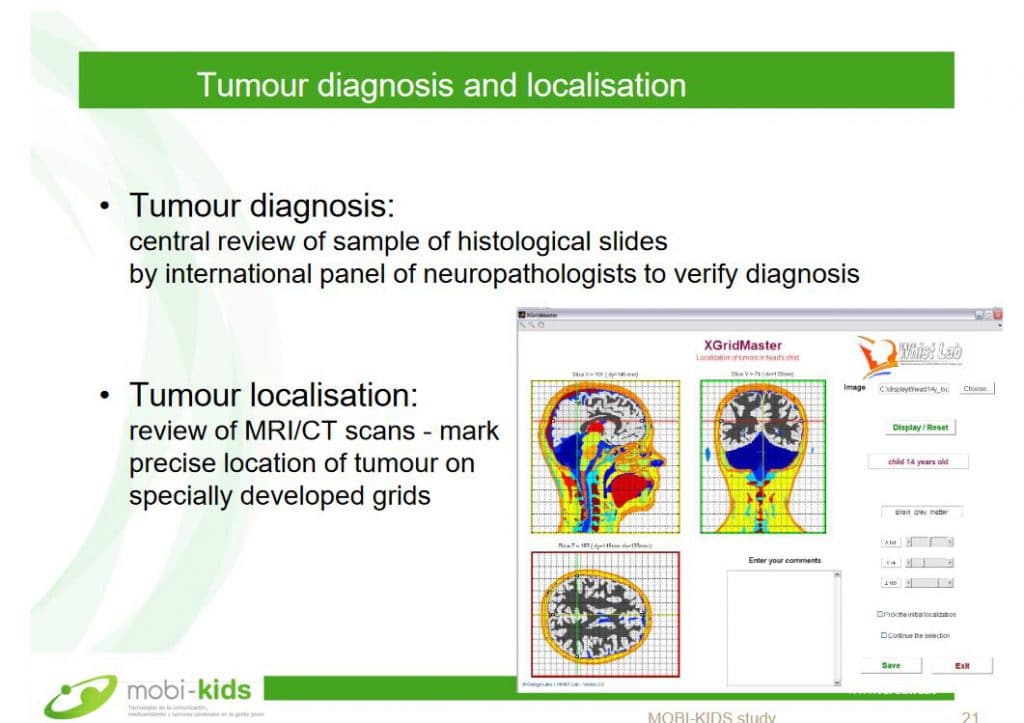 The families would certainly have refused to allow an industrial company to develop the spyware (XMobisense) put inside the cell phones of the cases and controls. The purpose of this tool was to collect the data used in the study. The same is true for the tumor localization software

(XGridMaster) that can be found above in a Mobi-kids presentation with the Whist Lab logo (a joint laboratory of the Institut Télécom and Orange Labs).

The legitimate question is: were the children and their families and the medical teams informed that the scientific team had entrusted this part of the study to an industrial company?

The controversial role of Orange in Mobi-kids study

Moreover, the controversial role of Orange was systematically minimized when the Mobi-kids article was published. The new “Conflicts of interest” section does not reflect the particular role played by the cell phone company in this study. The author Joe Wiart is just the tip of the iceberg…

Yet, in December 2011, Ms. Cardis presented the contribution of Orange as an integral part of the Mobi-kids study at a meeting organized by Whist Lab (joint laboratory of the Institut Télécom and Orange Labs).

We were able to obtain the proof below, namely two slides extracted from her presentation in which the France Télécom and Orange logos appear: 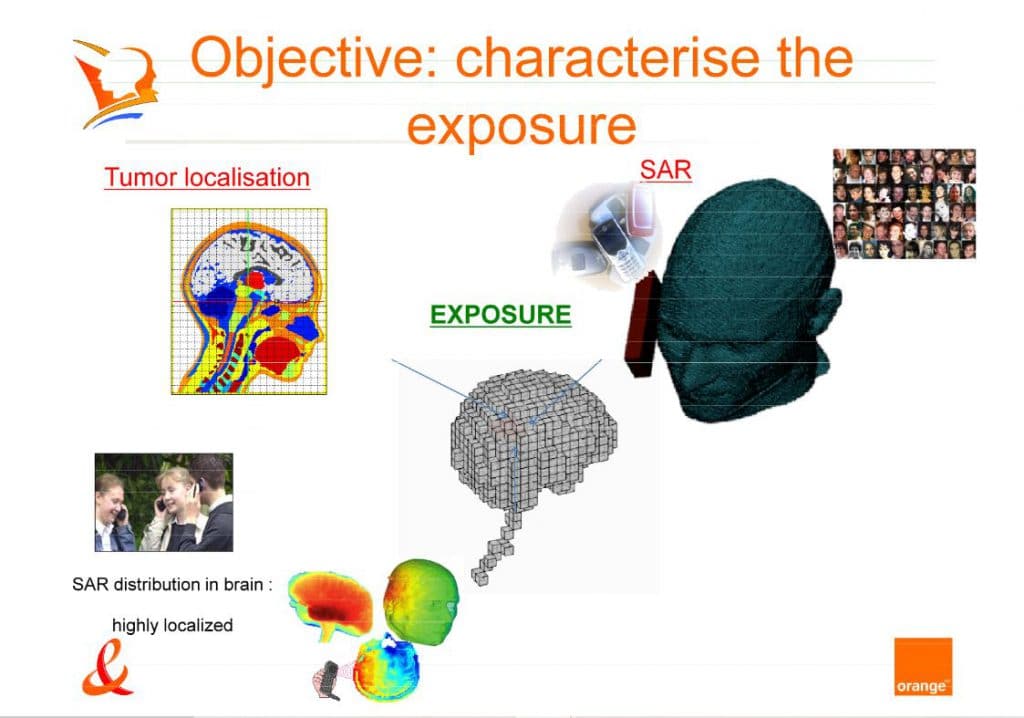 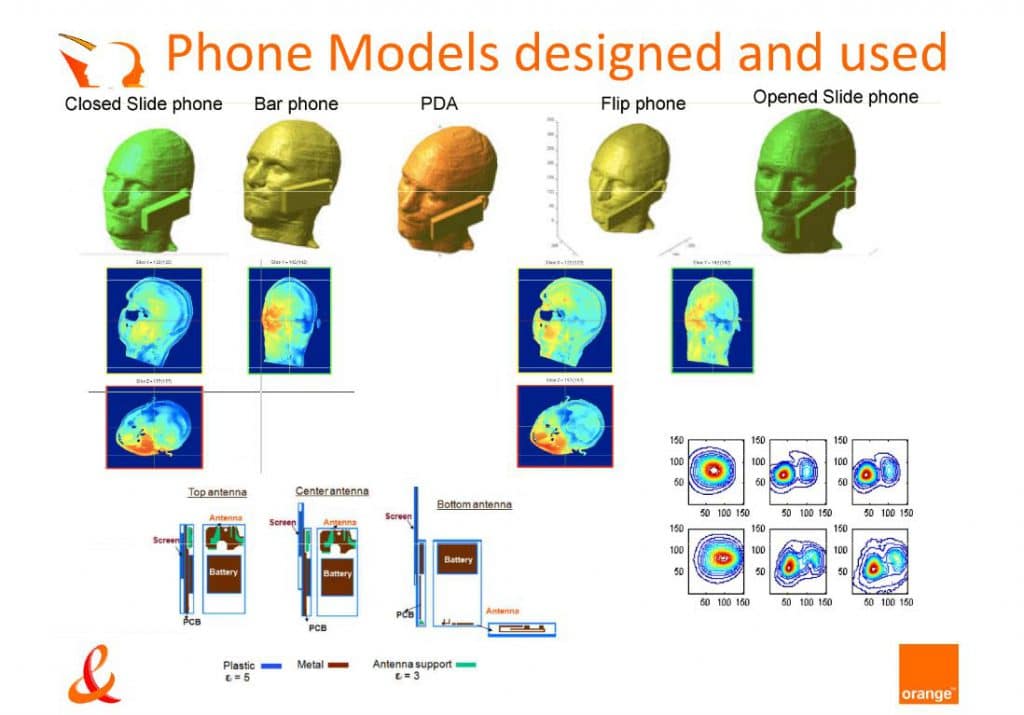 2011 presentation of Elisabeth Cardis with the Orange logo

During this 18th day dedicated to electromagnetic waves, among the speakers were representatives of ANFR, ANSES, IARC (WHO), the European Commission and the inescapable Mr. Joe Wiart as master of ceremonies. It is therefore difficult to imagine for a moment that the national and European authorities were not informed of the active role taken by Orange in Mobi-kids.

For Dr. Marc Arazi, president of the Phonegate Alert Association:

“We already know how in the past, in several other health scandals (tobacco, asbestos, etc…) industry has intervened to successfully distort science. The scientists of the Mobi-kids study are well aware of this. However, they did not hesitate to entrust an industrial company, in this case Orange, with privileged access to the very heart of the study. This is an ethical and moral fault!”

On the same subject:

Mobi-kids : our summary of the study