” ‘Phonegate’ Will Spatter Everyone in the Telecommunications Industry” 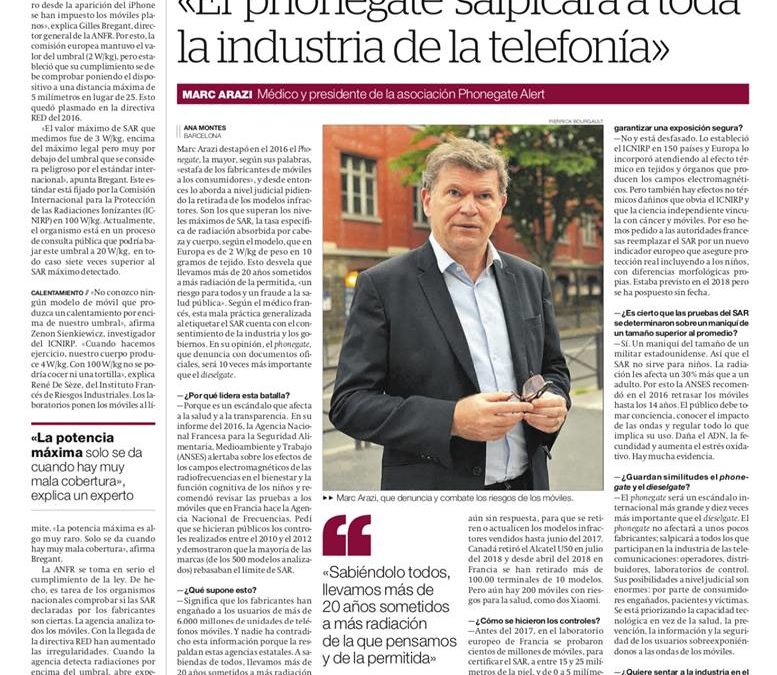 CONTROVERSY OVER THE WAVES
” ‘Phonegate’ will spatter everyone in the telecommunications industry”
by Ana Montes, Barcelona, elperiodico.com/es, 2 April 2019  – translation

Marc Arazi, president of the PhoneGate Alert association, predicts that the arrival of 5G will end up spreading the scandal

Marc Arazi unveiled ‘Phonegate’ in 2016, according to his words, the great “scam of the manufacturers of mobile phones on the consumers”, that since then approaches judicial level, requesting the withdrawal of the infringing models. They exceed the maximum levels of SAR, the specific rate of radiation absorbed by head and body, according to the model, which in Europe is 2 W/kg of weight in 10 grams of tissue. This reveals that we have been subject to more radiation than allowed for more than 20 years, “a risk for everyone and a public health fraud”. According to the French doctor, this generalized bad practice when it comes to labeling the SAR, has the consent of industry and governments. In his opinion, ‘Phonegate’, which bases its complaint on official documents, will be 10 times more important than ‘Dieselgate’.

– Why are you leading this battle?

-Because it is a scandal that affects health and transparency. In its 2016 report, the French National Agency for Food, Environmental and Occupational Health & Safety (ANSES) warned about the effects of electromagnetic fields of radio frequencies on the well-being and cognitive function of children and recommended reviewing mobile tests which in France are conducted by the National Frequencies Agency (ANFR). I asked that the controls made between 2010 and 2012 be made public and showed that most of the brands (of the 500 analyzed models) exceeded the SAR limit.

-What does this mean?

– It means that the manufacturers have deceived the users of more 6 billion mobile phones and nobody has contradicted this information because it is backed by these state agencies. We have been subject to more radiation than we thought and allowed for more than 20 years. The regulators of each country have let it pass. That is why we are facing a total failure of the regulation of the industry. Nor do governments invest enough to analyze mobile phones: in France only 130,000 euros per year for 70 models.

– Has the SAR been manipulated all over the world?

-Yes, that’s why in June 2018 we made an international request -without answer- to withdraw or update the infringing models sold until June 2017. Canada withdrew the Alcatel U50 in July 2018 and since April 2018 in France more than 100,000 terminals from 10 models have been withdrawn. But there are still 200 mobile phones with health risks like two from Xiaomi.

– How were these controls done?

– Before 2017, in the European laboratory in France hundreds of millions of mobile phones were tested, certifying the SAR, between 15 and 25 millimeters away from the skin, and from 0 to 5 millimeters, instead of being glued to the body, at 0 millimeters, as they are used. Many exceeded the threshold of 2W/kg reaching 4W/kg: 250 models exceeded 10-20 times the limits adopted in 1999 in Europe on the recommendation of ICNIRP (International Commission for the Protection of Non-Ionizing Radiation), a limit that in the USA is 1.6 W/kg because it is set by the FCC (Federal Communications Commission).

– Can we trust the SAR to guarantee a safe exposure?

-No and it is out of date. It was established by ICNIRP in 150 countries and Europe incorporated it, taking into account the thermal effect on tissues and organs that produce electromagnetic fields. But there are also harmful non-thermal effects that ICNIRP overlooks and that independent science links with cancer and mobile phones. That is why we have asked the French authorities to replace the SAR with a new European indicator that ensures real protection, including children, with their own morphological differences. It was planned in 2018 but has been postponed without a date.

– Is it true that the SAR tests were determined on a manikin of a size above the average?

-Yes, a manikin the size of a US military GI. So the SAR does not work for children. Radiation affects 30% more than an adult. This is why ANSES recommended in 2016 to delay mobile phones until the age of 14. The public must be aware, know the impact of the waves and regulate everything that implies its use. It’s serious: it damages DNA, fecundity, increases oxidative stress … There’s a lot of evidence.

– Do ‘Phonegate’ and ‘Dieselgate’ have similarities?

-‘Phonegate’ will be the biggest international scandal and ten times more important than ‘Dieselgate’. ‘Phonegate’ will not affect a few manufacturers; it will spatter all those involved in the telecommunications industry: operators, distributors, control laboratories. The possibilities at the judicial level are enormous: on the part of cheated consumers, patients and victims. The technological capacity is being prioritized instead of health, prevention, information and the security of the users, overexposing themselves to the waves of their mobiles phones.

– Do you want to put the industry on the bench?

-It has hidden the risks of mobile and wireless technology, so it will have to give explanations. All the control measures have been imaginary and unreal, so we cannot trust the industry at all to develop and implement 5G. That’s why 5G and ‘Phonegate’ are two trains that are going to collide. At the moment ‘Phonegate’ has already served for an Italian court to condemn its government to inform the population about these risks, and legal actions are being prepared.