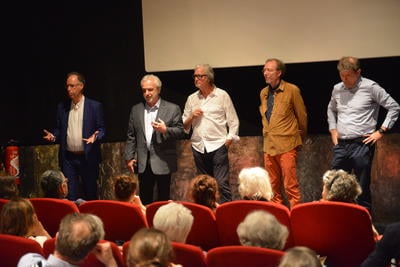 [:en]The event around the screening organized by the distributor “Jupiter Film” lived up to its promise.  A packed theater on Friday 25 May 2018, for the screening of the film “Ondes de choc”, produced by the Austrian investigative journalist, KIaus Scheidsteger.  And what is there to say about the several minutes of applause when he and Dr. George Carlo arrived, except the recognition by the public of the courage of the two men in their actions to inform people about the real dangers of the radiation of our mobile phones.
Over an hour of debate followed with the participants in the theater who bombarded the speakers, including Dr. Marc Arazi, President of Phonegate Alert, who came to present the latest developments in this industrial and health scandal.
The debate continued afterwards in an informal manner for more than an hour, all the speakers being assaulted by questions as well as a show of appreciation.
Jan Roellofs, President of “Jupiter film” announced that his filming of parts of the debate would soon be incorporated into a DVD.
While waiting, here are some pictures taken by the photographer and journalist, Pierrick Bourgault, whom we warmly thank for his assistance.