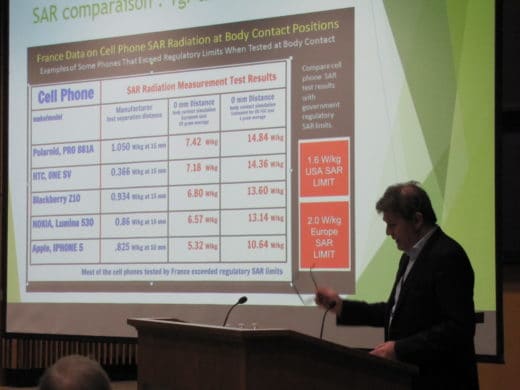 Following is an unofficial summary of the topic on the NTP cell phone radiofrequency studies discussed during the 20 June meeting of the NTP Board of Scientific Counselors.  The PhoneGate Alert Association is following this very important subject concerning global public health and has submitted comments to the meeting.
On 20 June 2018, a meeting of the Board of Scientific Counselors of the National Toxicology Program took place in Durham, North Carolina.  Topics discussed during the meeting included the studies of cell phone radiofrequency radiation (RFR) – report of the March 26-28, 2018 Peer Review of the NTP Technical Reports.
Dr. Chad Blystone, NIEHS (National Institute of Environmental Health Sciences), presented a summary of the Peer Review meeting.
Dr. Michael Wyde, NIEHS, delivered a presentation on follow-up studies on RFR:
“Follow-up studies will seek to investigate the perinatal effects, and further characterize organ-specific effects (heart, brain, adrenal medulla) in rats via immuno- and enzyme-histochemistry and molecular pathology  methods. The impact of RFR exposure on behavior and stress will be further investigated, including the assessment of activity, response to system-generated noise and RFR signals, evaluation of stress indicators, measurement of stress hormones, and heart rate. The primary areas of mechanistic research will include investigation into the role of heat as a contributing factor to RFR-induced effects, oxidative stress mechanisms, changes in gene expression in multiple tissues, and the effect on DNA damage and repair.”
Prior to the meeting, members of the Board received copies of the four written public comments submitted by:
–  Annie Sasco, Private Citizen.  Dr. Sasco is also Member of the Phonegate Alert Scientific Board.
–  P.K. Mahesh, Private Citizen
– Environmental Working Group
– Phonegate Alert
Two persons provided comments to the meeting by phone: Dr. Annie Sasco as a private citizen and Dr. Olga Naidenko of the Environmental Working Group.
Dr. Olga Naidenko:
“The NTP research is critical for addressing the gaps in our scientific understanding of the biological impacts of cellphone radiation. Much more research needs to be accomplished to understand how RF exposure impacts people, particularly children… In the absence of protective federal regulations based on health effects, EWG will continue to advise that consumers take simple precautions… for themselves and their children to reduce exposure. EWG also anticipates that the results of the NTP study will be helpful in guiding the design of safer technology alternatives that would benefit our entire society.” – from written comments.
Dr. Annie Sasco:
Dr. Sasco summarized the evidence as it was available at the time of the IARC Monograph meeting (2011) which led to RFR being rightly classified as “2B possibly carcinogenic to humans”.  Since 2011, the results of more epidemiological (CERENAT, Cephalo) and experimental (NTP, Ramazzini) studies have provided further evidence of carcinogenicity. If the IARC evaluation was to be reconsidered in the future it could lead to a  “2A probably carcinogenic to humans” classification. For this it is exceedingly important that the results of the Mobi-kids study of brain tumors in children, adolescents and young adults, which have been available since January 2017 but not made public, be published in a peer-reviewed paper in the immediate future. In addition, there is an urgent need for further large experimental studies on other RFR before new equipment is launched such as 5G.  Finally, for all of this to become reality, we absolutely need to have independent public agencies continuing to conduct valid, thorough evaluations. Funding of agencies such as NIEHS and IARC, as well as other institutions dealing with the health of populations, cannot and should not be cut.
There was a brief discussion at the end of the meeting by Board members.  One person commented that it was “a bit striking” that the Peer Review Panel upgraded the evaluations of carcinogenicity for seven different findings compared to those in the initial NTP draft reports, the highest being “clear evidence of cancer” (heart schwannomas in male rats exposed to both GSM and CDMA modulations).  There was no downgrade of the findings by the Peer Review.  The manner in which the conclusions of the studies would be communicated was also discussed: how might the study relate to real and potential exposures;  how to make the study results more understandable in terms of changing (cell phone) use behavior.