Why not call with your smartphone at your ear? 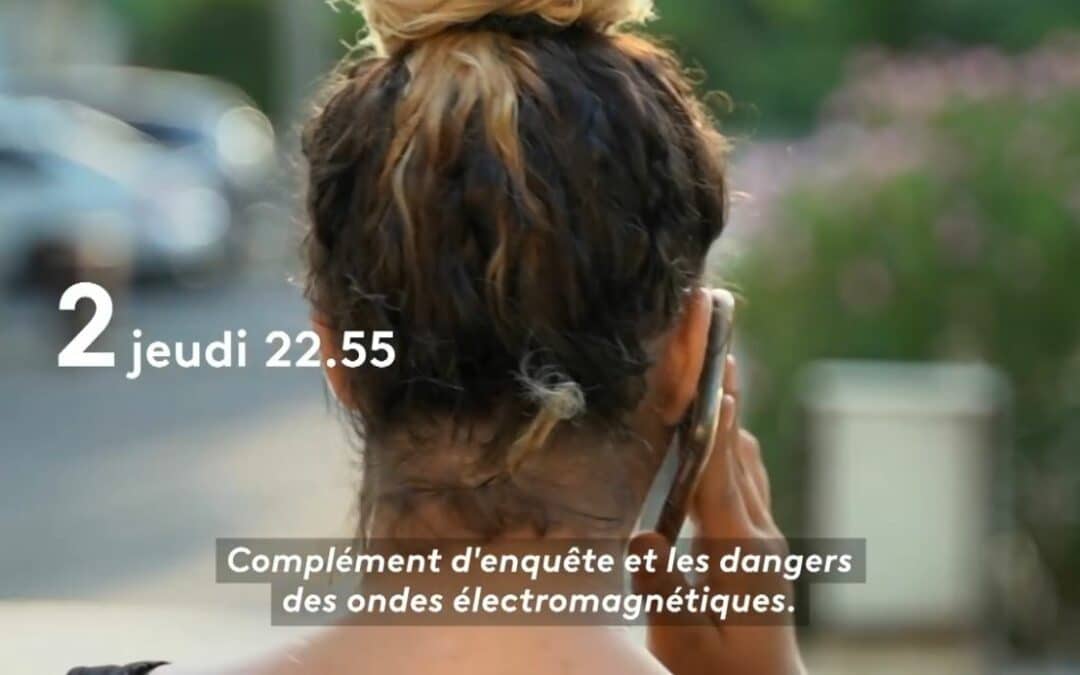 Since the appearance of the first cell phones, putting your device in contact with your head is a daily gesture that has become more than mechanical for billions of users. But is it without health risks? No, and the quadrupling of the most serious brain cancers in thirty years should alert us.

The waves of mobile telephony “possible carcinogen” for humans

In 2011, the World Health Organization (WHO) classified radio frequency (RF) waves in class 2B, “possibly carcinogenic to humans“. To arrive at this decision, a little over twenty years after the mass diffusion of this new technology, the WHO relied on the work of experts from the International Agency for Research on Cancer (IARC).

They have noted through several studies, including the Interphone study, that the risk of gliomas, malignant brain tumors or acoustic neurinomas, benign tumors was increased for uses of 30 minutes per day for 10 years (equivalent to 2000 hours). The mobile being positioned on the same side as the tumor.

In 2021, a study from the University of California, Berkeley School of Public Health*, has just refined the link between the use of your cell phone and the risks of brain tumors appearing. According to the American scientists, the danger becomes real if you spend more than 17 minutes a day on the phone.

As Medisite reminds us in its article:

“The researchers’ findings suggest that the danger becomes real if you total more than 1,000 hours of calling over a 10-year period. This would increase the risk of brain tumor by 60%… “Cell phone use highlights a multitude of public health issues, and it has unfortunately received little attention from the scientific community,” alerted the study’s lead author, Joel Moskowitz, PhD”

Between 1990 and 2018, the annual number of new cases of histologically confirmed glioblastoma (one of the most aggressive types of brain cancer) increased fourfold and more for both sexes. That is, 3,481 new cases of these glioblastomas in metropolitan France in 2018, 58% of which were in men. They were only 823 in 1990.

In concluding its analysis, Santé Publique France considers that extrinsic factors that may play a role in the increased incidence of glioblastoma could be:

Santé publique France also notes an overall increase in brain cancers. As for acoustic neuroma, a benign tumor of the auditory nerve, on the seriniti blog we read:

A lot of misinformation about the risks of brain cancer, the example of Dr Cymes

However, it is not uncommon to read or hear in the media to justify the harmlessness of cell phone waves that there is no increase of brain cancers in France since their mass introduction. This was still the case recently of the well known Dr. Michel Cymes, who in December 2020 in an article entitled “5G: is there a risk to our health” explains wrongly this on the website of the radio RTL :

“Then, still according to the research, there is no increase in cases of brain cancer in the Western world, where cell phones have become widespread. This statement takes into account all the parameters and especially the aging of the population.”

Despite our efforts, neither the RTL site nor Dr Cymes have seen fit to rectify or even discuss the scientific data to date.

Do not rely on the SAR displayed by the manufacturer

The specific absorption rate (SAR) measures the amount of energy transmitted locally by the waves of your cell phone. Only thermal effects (microwave effects) are taken into account. On the other hand, the non-thermal and long-term health effects are totally ignored by the public authorities.

Since 2016, and the revelations of the Phonegate scandal, we know that the SAR is an indicator considered unreliable by the ANSES both for adults and children. We have obtained, thanks to the legal actions of Dr. Marc Arazi before the Administrative Court, the publication on the DATA ANFR site of hundreds of SAR test reports from all manufacturers which show that since 1995 we have all been knowingly overexposed by manufacturers to the waves of our mobiles.

As we all know, “the devil is often in the details”! And for the measurement of SAR head yet so important for our health (not to exceed 2W/kg), an article published in April 2019 by Prof. Om Gandhi (member of our scientific council), in the prestigious journal of engineers IEEE from the analysis of the tests of the ANFR concludes in this sense:

“It is important that safety compliance testing be performed in the context of cell phones by actual users. This should include phones held close to the body at 0 mm spacing and against the tissue pinna rather than a simulated plastic spacer pinna.”

In summary, Om Gandhi confirms something of critical importance: head SAR is not actually measured at contact. According to his estimate, there is a spacing of 10 mm. But as we will see, every millimeter counts to seriously evaluate the SAR. 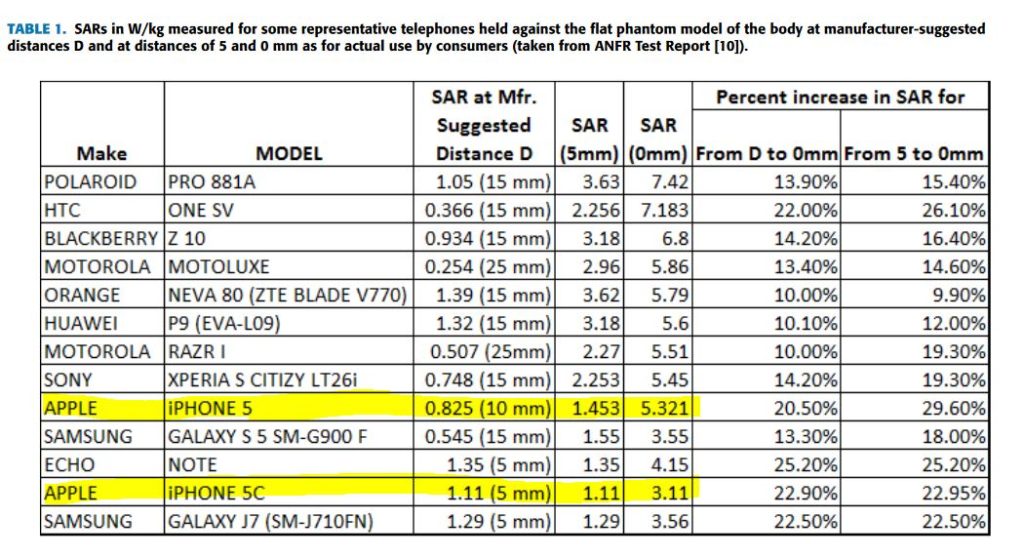 “For cell phones held against the auricle, the measured SAR is 2.5 to 3 times higher than 10 g. The 1g or 10g SARs would also be much higher if the SAM dummy had not used the artificial plastic spacer in place of the human pinna simulating the tissue. […] The tapered plastic spacer artificially separates the radiating antenna from the cell phone which represents up to 10 mm of additional spacing for RF coupling in the head region, resulting in an underestimation of the 1 g and 10 g SARs by a factor of 2-4. This 2-4 factor of higher SAR is also confirmed by ANFR.”

It is also, what showed in November 2020 the tests conducted at the request of France Television for the documentary of Complément d’enquête: “5g, the wave of a doubt”. Indeed, the director Nicolas Vescovacci asked the specialized company Art Fi to test 11 new and old cell phones of the most sold brands. The results speak for themselves:

Indeed, the tests conducted on the Apple iPhone 8 show that measure the SAR in contact with the skin in 4G the measure 1g (U.S. standard) comes out to 10.168 W/kg and for 10 g to 4.594 W/kg. Here are some examples of the results found in this simplified table (DAS equal SAR): 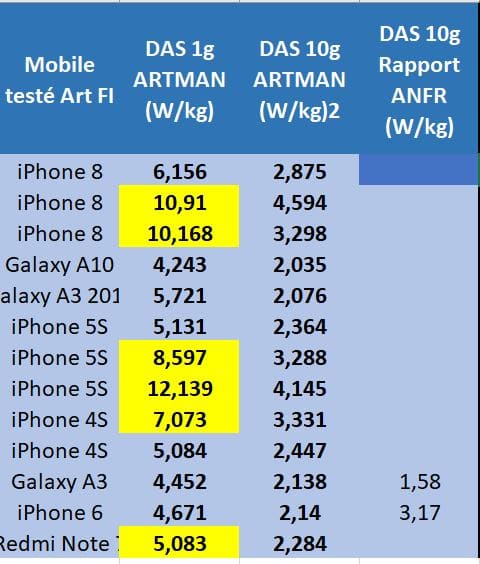 Children, young people and pregnant women population most at risk

The penetration of waves in the cranium of a child is much higher, about 30%. Even more for a fetus in gestation in its mother’s womb. It is therefore particularly advisable to keep your cell phone away from your belly if you are pregnant.

In addition the ANSES recommends since its report of July 2016 to delay until the age of 14 years the acquisition of a cell phone. An advice that is neither known nor followed by many families. The fault mainly to public authorities who do not want to hear the recommendations of their health agencies and leave parents deprived of arguments.

For many years, manufacturers as well as public authorities have encouraged us to use wired or Bluetooth hands-free kits. A wired kit is systematically delivered with the cell phone. But are they without risks for our health?

According to the recommendations of the California Department of Health in December 2017, nothing is less certain! Here are the main reasons:

In addition, the Californian agency was the first to recommend that people no longer put their cell phones in contact with their bodies. We have also widely discussed the subject in our article “Don’t put your cell phone in your pocket anymore!”

However, these recommendations coming from a major American health agency are still mostly ignored in France and in Europe by the public authorities.

How to protect your health?

Nothing could be easier! All you have to do is to stop putting your cell phone in contact with your head. Use the loudspeaker function as much as possible to make calls. And we advise you to use a wired hands-free kit “Air Tube” instead. The air in the cord avoids the propagation and concentration of the wave at the ear. For the followers of Bluetooth earpieces, do not keep them permanently and follow the recommendations of the Californian agency

We have also made short videos in the “Protect” section of our site that are easy to use and that we advise you to widely relay around you.

How can we help the action of the association?

There are now tens of thousands, even hundreds of thousands of us who know what the Phonegate scandal is. But the road ahead is immense; 5 billion cell phone users are directly concerned.

So all help is welcome, you can :

A word to conclude

The Phonegate scandal is above all the revelation of a generalized deception of the industrialists concerning the standards supposed to protect our health from 2G, 3G, 4G technologies. With 5G, we must imperatively ensure that it will not continue to knowingly endanger our health. And for our part, we have no confidence in the industry and regulators to put an end to it until consumers are mobilized against this new public health issue.

Sign our petition and join the more than 15,000 supporters who are committed to protecting the health of cell phone users