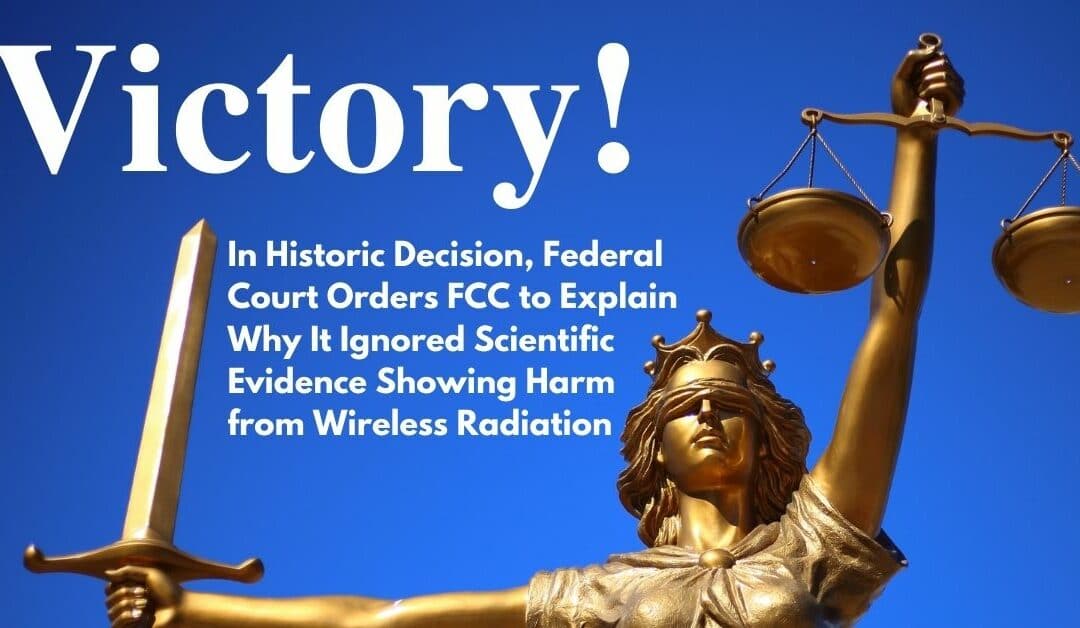 In an important decision issued on Friday, August 13, 2021 by the U.S. Court of Appeals for the District of Columbia, the judges ruled in part in favor of our U.S. partner Environmental Health Trust (EHT) and the other plaintiffs in their lawsuit initiated in 2019 against the U.S. telecom regulator, the Federal Communications Commission (FCC) :

The court’s reasons are even clearer, requiring the FCC to :

“(i) provide a reasoned explanation for its decision to retain its testing procedures for determining whether cell phones and other portable electronic devices comply with its guidelines, (ii) address the impacts of RF radiation on children, the health implications of long-term exposure to RF radiation, the ubiquity of wireless devices, and other technological developments that have occurred since the Commission last updated its guidelines, and (iii) address the impacts of RF radiation on the environment.”

Two years ago almost to the day, the American journalist and Pulitzer Prize winner Sam Roe revealed in the Chicago Tribune, at the end of an eighteen-month investigation, a total failure of the tests of exposure levels (Specific Absorption Rate-SAR) carried out on the best-selling cell phones in the United States (Apple, Samsung, Motorola). This investigation followed the discovery by Sam Roe, of the Phonegate case revealed as early as July 2016, in France, by Dr. Marc Arazi.

Following these revelations, several American and Canadian law firms launched the first class actions against the manufacturers Apple and Samsung, including the Fegan Scott law firm, which denounced at the time a “PhoneGate”:

“The manufacturers told consumers it was safe, so we knew it was important to test for RF radiation exposure and see if that was true,” Fegan noted. “It’s not true. Independent results confirm that RF radiation levels are well above the federal exposure limit, sometimes exceeding it by 500 percent when phones are used as Apple and Samsung encourage us to do. Consumers deserve to know the truth.”

A “historic” decision for the Environmental Health Trust

For Edward B. Myers, counsel for the Environmental Health Trust, the lead petitioner in EHT et al. v. the FCC:

“The court granted the petitions for review because, contrary to the requirements of the Administrative Procedure Act (APA), the commission failed to provide a reasoned explanation for its assertion that its guidelines adequately protect against the harmful effects of exposure to radiofrequency radiation.”

For her part, the president and founder of EHT, Devra Davis, considers this decision to be “historic”! Here is what she wrote in her press release :

“If cell phones were a drug they would have been banned years ago. 5G would never have been allowed to market. An ever mounting body of published studies — ignored by the FCC — clearly indicates that exposure to wireless radiation can lead to numerous health effects, especially for children. Research indicates wireless radiation increases cancer risk, damages memory, alters brain development, impacts reproductive health, and much more. Furthermore, the way the FCC measures our daily exposure to cell phone and cell tower radiation is fatally flawed and provides a false sense of security.”

A judgment that will have an international impact

Indeed, the European regulation is even less protective for the health of users who are on average three times more exposed than an American or Canadian user, and this is due to the alignment of our standards on the recommendations of a pseudo “independent” scientific agency based in Germany, the ICNIRP (International Commission on Non-Ionizing Radiation Protection).

For five years, Dr Marc Arazi and the association Alerte Phonegate have denounced with all their strength and evidence in a recent book Phonegate (Massot Editions), an inappropriate regulation to protect the health of billions of users of cell phones and the voluntary deception of manufacturers who have knowingly overexposed them for thirty years. Moreover, for the one who launched the international alert:

“We welcome this decision of the U.S. justice which shows to what extent the national regulatory agencies bear a huge and heavy responsibility in this global scandal. The conflicts of interest within the telecom regulators that we have been denouncing for years must be heavily sanctioned. We must put an end to the feeling of impunity that prevails among many of their leaders, certainly linked to the overpowering influence of the cell phone lobby in all sectors (economy, media, politics,…).